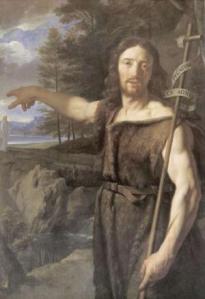 The theological virtue of faith is about seeing.

Here is the reading for this Sunday:

And this is the testimony of John.
When the Jews from Jerusalem sent priests
and Levites to him
to ask him, “Who are you?”
He admitted and did not deny it,
but admitted, “I am not the Christ.”
So they asked him,
“What are you then? Are you Elijah?”
And he said, “I am not.”
“Are you the Prophet?”
He answered, “No.”
So they said to him,
“Who are you, so we can give an answer to those who sent us?
What do you have to say for yourself?”

He said:
“I am the voice of one crying out in the desert,
‘make straight the way of the Lord,'”
as Isaiah the prophet said.”
Some Pharisees were also sent.
They asked him,
“Why then do you baptize
if you are not the Christ or Elijah or the Prophet?”
John answered them,
“I baptize with water;
but there is one among you whom you do not recognize,
the one who is coming after me,
whose sandal strap I am not worthy to untie.”

John the Baptist does two things quite well: he looks away from himself and he looks toward the coming of the Messiah. Both are exercises of the virtue of faith and both are about learning to see correctly.

Throughout his preaching John does not proclaim himself. Again and again, he states that he is not the Messiah. At best John says he is, “the voice of one crying out in the desert…” John knew the tenor of his times. He knew the deep yearning of the people. He, in fact, was witnessing it first-hand as the whole country-side was streaming toward him in order to be baptized. John of all people at that time could have seized all of that energy and power! But he didn’t. John recognized the truth of himself. We find this expressed in his admission regarding the one coming after him whose, “… sandal strap I am not worthy to untie.” This recognition was an act of faith and it enlightened his eyes in order to truly see.

Faith is the theological virtue by which we believe in God and believe all that he has said and revealed to us, and that Holy Church proposes for our belief, because he is truth itself. By faith “man freely commits his entire self to God.” For this reason the believer seeks to know and do God’s will. “The righteous shall live by faith.” Living faith “work(s) through charity.” (Rom. 1:17, Gal. 5:6) (CCC #1814)

Because John recognized his own need he was then able to recognize the Messiah when at last he came. John always points toward Christ.

“I baptize with water;
but there is one among you whom you do not recognize,
the one who is coming after me,
whose sandal strap I am not worthy to untie.” (John 1:27)

The gift of faith remains in one who has not sinned against it. But “faith apart from works is dead”: when it is deprived of hope and love, faith does not fully unite the believer to Christ and does not make him a living member of his Body.

The theological virtue of faith is neither naïve hope nor illusion but true seeing enlightened by honesty and courage.