At one point in his Catholicism series, Fr. Robert Barron reflects on Israel’s hopes for the coming messiah.  He lists out the expectations of what the messiah would accomplish and he demonstrates how Jesus fulfills all of these expectations yet in often unexpected ways.  One such example is the expectation that the messiah would restore the unity of Israel.  Fr. Barron points out that Jesus does in fact accomplish this but not through leading an army nor through political maneuvering.  Jesus accomplishes the expectation of restoring unity through his miracles of healing.  In their physical impairments; the blind, the lame, the mute and the leper were not only handicapped in body but were also cut off from the ritual life of Israel and therefore could not fully participate in their society.  By his acts of healing not only was Jesus curing the physical ailment of the person but he was also restoring him or her to full participation in the community.

This Sunday’s gospel story of the blind beggar Bartimaeus (Mk. 10:46-52) is a case in point.  But, not only that, it must be noted that Jesus recognizes the separation and isolation present that was easily overlooked by the very people who were longing for the messiah.  Mark tells us that when Jesus left Jericho he was with a sizable crowd and that as this crowd surrounding Jesus draws near and begins to pass the blind beggar Bartimaeus (in his poverty it must be noted) weakly begins to call out: Jesus, Son of David, have pity on me.  Mark specifically then states: And many rebuked him, telling him to be silent.  The very ones who were yearning for the full restoration of Israel remained blind to this man’s (their fellow Israelite) separation and isolation.

But, Jesus saw Bartimaeus and he heard his cry.  In this we are brought to the realization that not just the work of restoring unity but also the ability to first see isolation and separation is an aspect that also marks the long awaited messiah as anticipated in the writings of the prophet Jeremiah.  Part of which we hear in today’s first reading (Jeremiah 31: 7-9): Behold, I will bring them back from the land of the north; I will gather them from the ends of the world, with the blind and the lame in their midst, the mothers and those with child; they shall return as an immense throng.

Through Christ, we have been made a priestly people and we now share in the High Priesthood of Christ (Hebrews 5:1-6).  As a nation of priests we are entrusted with the work of restoring unity to a divided and hurting world and the first step in this work (upon which the whole is based) is the ability to see and recognize separation and isolation.  Separation and isolation within our own world and within our own hearts.  For this, it is essential that we have the trust and faith of the blind beggar.  Like Bartimaeus, we too need to trust that our God is a loving and merciful God who hears the cry of his people.

After hearing his request, Jesus says to Bartimaeus: Go your way; your faith has saved you.  Mark then writes, Immediately he (Bartimaeus) received his sight and followed him (Jesus) on the way.  Through this encounter in a place of isolation and separation, Bartimaeus came not just to be healed physically of his blindness but also to be healed spiritually as he came to recognize Jesus as both Messiah and Lord.  Today’s gospel calls us also to a healing just as it did that first crowd.  May our blindnesses also be healed and may we learn to see as our Lord sees in order that our work of restoring unity might be true.

Today (Sunday, October 14th) I am heading to Rome for a week-long visit.  During the week I will visit with our seminarian Michael Hendershott studying at the Pontifical North American College and with the faculty at the seminary.  As Vocation Director, I visit each seminary our diocese uses at least once a year to check on our men.  I told Bishop Stika that this visit to Rome is a cross that I am willing to suffer.  Lol!

Following the visit I will spend some days visiting with my friends in the Community of Sant’Egidio.  It will be good to catch up with them and join the community’s prayer.

The day before my return I will be attending the canonization ceremony set for October 21st at St. Peter’s.  Six men and women are to be canonized, one of these being Bl. Kateri Tekakwitha who will be the first Native American saint proclaimed by the Church.  I was able to get a ticket that will allow me to participate in the ceremony by assisting with the distribution of communion.  I have never been to a canonization ceremony before and am excited for the opportunity!  Part of this being that my own family heritage is part Native American (Choctaw and Cherokee to be exact).

I am looking forward to a great visit!

It is not good for man to be alone.

These words spoken by God at the very dawn of creation bring forth a singular truth regarding the human condition.  Communion and relationship are at the very root of what it means to be human.  In one sense this should come as no surprise as we are made in the image and likeness of God who is a communion of persons – Father, Son and Holy Spirit.  God is not a “far-away and high loneliness” but rather a living relationship of three Persons.  It can be said that God does not live alone and therefore man and woman are not meant to live alone.  We are meant for communion and communion, solidarity and support are the root of every human vocation.  By living communion (whether that be the communion of friendship, of discipleship, of the common good, of church, of witness) we are being brought to that ultimate communion which will be the union of the human family with God.

This Sunday we are asked to reflect on a specific kind of communion which originates from marriage – the union of man and woman.

I wish that I could say that I get into our surrounding mountains here in East Tennessee more often than I do.  We are indeed blessed here with the beauty of God’s creation.  But, even if I cannot get away for a hike too often, I am pretty consistent about taking my two dogs for a walk at least every other day if not every day.  For a few minutes I step out from the office, I step away from the computer and from the Internet and facebook, I let go of whatever project is occupying my thoughts and I am able to be with my dogs and enjoy the beauty of the day and creation.  When I do this I am always better for it.  Creation and its structure and laws has a way of putting things right, speaking to the truth and depth of who we are and refreshing the soul.

In today’s gospel (Mk. 10:2-16) when our Lord is asked if it is lawful for a husband to divorce his wife he turns to creation when he gives his answer.

But from the beginning of creation, ‘God made them male and female.  For this reason a man shall leave his father and mother and be joined to his wife, and the two shall become one flesh.’  So they are not longer two but one flesh.  Therefore what God has joined together, no human being must separate.

This “turn to creation” on our Lord’s part is not an aside nor just a nice rhetorical device.  To truly understand marriage one must look to the laws of creation itself.  Marriage is not rooted in the laws of governments that come and go nor is it ultimately founded in the social values of any given time which, it must be acknowledged, are often biased toward the powerful and oppressive of the weak and poor.  Marriage even precedes the foundation of the Church herself, whose relation to marriage is that of steward and not creator.  Marriage, the union of man and woman, originates in creation itself.  It is even such a high display of love that it is presented as an image of God’s love for his people and Christ’s love as bridegroom for his bride, the Church.

That the two shall become one flesh testifies (probably more powerfully than anything else) to the reality that communion lies at the very foundation of human existence and human vocation.  This is a needed witness, if not the most important witness, to our day and age which is so dominated by a self-centered and self-seeking approach to human existence.  Marriage lived even in the struggles of human weakness yet open to God’s healing and sanctifying grace, witnesses to that fundamental law of creation that the two actually do become one flesh.  A law which can neither be faked nor manipulated because it is linked to truth itself.  Life is found through communion, through sacrifice and through love and not through a self-centered and isolated existence.

This Sunday’s second reading from the Letter to the Hebrews (2:9-11) reminds us that when we were lost and isolated in sin and death, God stepped out of his glory and took on suffering for us.  In order that, He who consecrates and those who are being consecrated all have one origin.  (Notice again the use of the imagery of creation and origin.)  Our origin is God, a communion of Persons, who spoke forth creation in love and who let go of his glory in love that we might have life.

In the love and sacrifice of communion we are rooted and we are fulfilled.  It is written into the very laws of creation and into creation being sanctified by grace. 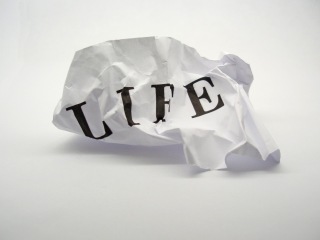 A life lesson I have gained:

If people speak ill of you and this leads to others avoiding you just because of what they have heard, then give thanks to God for the ones who speak ill.

They are doing you a great favor.

They are helping to sift out the fools from your life so you do not have to suffer them.