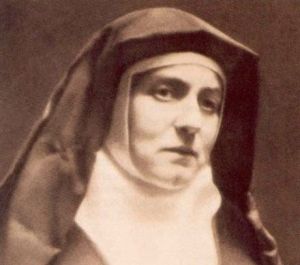 Edith Stein was born into a Jewish family in Breslau, Prussia in 1891.  During her life Edith was to become a well respected scholar and prolific writer.  In 1922 she entered the Catholic Church.  She was a leading thinker in the Catholic women’s movement in Germany and entered the Cologne Carmel in 1933, making final profession of vows in 1938 taking the name Teresa Benedicta of the Cross.  Being of Jewish descent, she was arrested by the Nazis and sent to Auschwitz/Birkenau and died in 1942.

Her writings are of great value and offer great wisdom for the life of discipleship.  Below is an excerpt that speaks to trusting in God even in the temptation of disbelief and despair of nothingness.

Anxiety, to be sure, is under ordinary circumstances not the dominant mood of human life.  It overshadows everything else only under pathological conditions, while normally we go through life almost as securely as if we had a really firm grip on our existence.  This may in part be explained by the fact that we feel tempted to pause at any superficial view of life which stimulates an appearance of lasting existence within a static temporal continuum and which under the veil of our multiple cares hides from us the sight of life’s nullity.  Generally speaking, however, this feeling of security in human existence cannot be called a mere result of such an illusion of self-deception.  Any circumspect reflective analysis of the being of people shows clearly how little reason for such a feeling of security there is just in actual human existence, and to what extent the being of people is indeed exposed to nothingness.

Does this mean then that the feeling of existential security has been proven objectively groundless and irrational and that therefore “a passionate … consciously resolute and anxiety-stricken freedom toward death” represents the rational human attitude?  By no means.  The undeniable fact that my being is limited in its transience from moment to moment and thus exposed to the possibility of nothingness is counterbalanced by the equally undeniable fact that despite this transience, I am, that from moment to moment I am sustained in my being, and that in my fleeting being I share in enduring being.  In the knowledge that being holds me, I rest securely.  This security, however, is not the self-assurance of one who under her own power stands on firm ground, but rather the sweet and blissful security of a child that is lifted up and carried by a strong arm.  And, objectively speaking, this kind of security is not less rational.  For if a child were living in the constant fear that its mother might let it fall, we should hardly call this a rational attitude.

In my own being, then, I encounter another kind of being that is not mine but that is the support and ground of my own unsupported and groundless being.  And there are two ways in which I may come to recognize eternal being as the ground of my own being.  One is the way of faith when God reveals himself as he who is, as the Creator and Sustainer, and when our Redeemer says, “He who believes in the Son possesses eternal life” (John 3:36).  Then I have in these pronouncements clear answers to the riddle of my own being.  And when he tells me through the mouth of the prophet that he stands more faithfully at my side than my father and my mother, yea that he is love itself, then I begin to understand how rational is my trust in the arm that carries me and how foolish is all my fear of falling prey to nothingness – unless I tear myself loose from this sheltering hold.

The way of faith, however, is not the way of philosophic knowledge.  It is rather the answer of another world to a question which philosophy poses.  But philosophy has also its own specific way: It is the way of discursive reasoning, the way or ways in which the existence of God is rationally demonstrated.