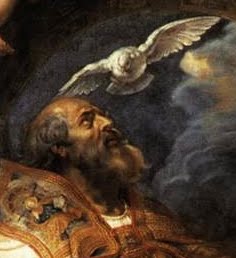 On September 3rd the Church celebrates the feast of St. Gregory the Great – pope and doctor of the Church.  St. Gregory is noted for the liturgical reform and chant initiated during his papacy.  He wrote on many topics, below is an excerpt from a homily he wrote on Mt. 4:18-22.

You have heard, dearly beloved, that at a single command Peter and Andrew left their nets and followed the Redeemer.  They had at this time seen him perform no miracles, they had heard nothing from him about eternal retribution: and yet at a single command from the Lord they forgot everything they seemed to possess.  How many of his miracles do we see?  How much suffering do we endure?  How many harsh warnings threaten us?  And yet we refuse to follow him when he calls.  He who counsels us about conversion is already seated in heaven; he has already subjected the necks of the Gentiles to the yoke of faith; he has already laid low the world’s glory; in its mounting ruins he already declares the approaching day of his strict judgment: and yet our proud hearts do not desire willingly to abandon what they lose daily, whether they will or not.  Dearly beloved, what are we going to say at his judgment, we who are not turned away from love of the present world by commands nor corrected by buffeting?

But someone may say in his silent thoughts, “What, and how much, did they give up at the Lord’s command, these two fishermen who had almost nothing?”  But in this, dearly beloved, we must weigh up the natural feeling rather than the amount.  Someone who has kept back nothing for himself has left much behind; someone who has abandoned everything, no matter how little it is, has left much behind.  Surely we hold on to what we have with love, and what we do not have we long for and seek to possess?  Peter and Andrew gave up much when along with their possessions they renounced even their craving to possess…

Nothing can be offered to God more precious than good will.  Good will means to experience fear for the adversities of another as if they were our own, to give thanks for a neighbor’s prosperity as for our own advancement, to believe another’s loss is our own, to count another’s gain our own, to love a friend not in the world but in God, to bear even with an enemy by loving him, to do to no one what you do not wish to suffer yourself, to choose to help a neighbor in need not only to the extent of your ability but even to assist him beyond your means.  What is richer and more substantial than this whole burnt offering, when what the soul is offering to God on the altar of its heart is a sacrifice of itself?