About once a month we have a “Faith in Film” night at the Catholic Center.  At “Faith in Film” we watch a film that has a faith theme and then spend some time afterwards discussing the movie.  The last movie we viewed was “The Assassination of Jesse James by the coward Robert Ford”.  Often, when we think of movies with a faith theme we tend to envision movies that portray the glory or triumphant struggle of faith but there are also movies that explore the other side – the reality of sin and its consequences.  “The Assassination of Jesse James by the coward Robert Ford” is one such film I believe.  It is not necessarily an “easy” movie to watch precisely for this reason.  It is a film that explores the psychological and spiritual landscape of sin and its effects.  Within the movie there are many amazing scenes of fall and winter landscapes which visually portray the stark inner landscapes of the film’s characters … landscapes that have been deadened and made barren by violence and sin. 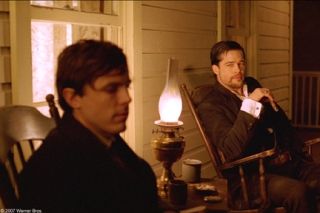 Jesse James, played by Brad Pitt, is not romanticized in this movie.  He is presented as a fully complex character – extremely violent, a killer, yet human and full of paranoia near the end of his life.  Robert Ford (played by Casey Affleck) – the man who would assassinate James – is also presented in the complexity of his humanity.  He does not come off as a hero nor is he meant to.  Both characters are men fully caught up in the twisting and disfiguring reality of sin and violence.

There is a telling scene near the end of the movie where James and Ford are sitting together in a room of James’ home in St. Joseph, Missouri.  The house is quiet and James is staring out the window.  He says, “I go on journeys outside my body and look at my red hands and angry face and I wonder where I have gone wrong.  I’ve been becoming a problem to myself.”  Ford is in a stunned silence.  He does not have a response to this admission of James.  He departs the room and James continues to stare out the window.

It is, I believe, a poignant portrayal of the affect of sin in ones life.  In sin, we become problems to ourselves.  Problems that we, on our own, can neither solve nor riddle our way through.  We are too twisted, too ineffectual and too lost.  We stand in the need of grace.

The first reading for this coming Sunday is taken from the Book of Wisdom.  The first verse of the reading says this, “Before the Lord the whole universe is as a grain from a balance or a drop of morning dew come down upon the earth.” (Wisdom 11:22)  In the Gospel reading we are given the story of Zacchaeus the tax collector (Luke 19:1-10).  In the story we are told that Jesus is passing through Jericho and Zacchaeus – a short man – has climbed a tree in order to see the controversial rabbi.  When Jesus comes to the place where Zacchaeus is, he looks directly up at the man and says, “Zacchaeus, come down quickly, for today I must stay at your house.”

When I hold these two verses together I find myself envisioning a common cinematic technique – the movement from a grand scene of the universe step by step to a particular place and moment in our world.  The full universe to our galaxy to our solar system past the moon to earth through the clouds to the Middle East to the Holy Land to Jericho to the street to our Lord looking up at this short man in a tree.  From the Lord who views all creation as a grain of sand to Zacchaeus in the tree – it is the movement of grace.  “Zacchaeus, come down quickly, for today I must stay at your house.”

As soon as our Lord says this, we are told that the other people began to grumble.  Zacchaeus is a tax collector, he is a man caught up in the barren landscape of sin and violence and the others know this.  He is a sinner, let us not kid ourselves, we must neither romanticize this man before the advent of grace in his life nor reduce him to a funny little children’s cartoon character.  We must see him for who he is, acknowledge the violence of the system he represents and recognize the very real need in which he, himself, stands.  Maybe an equivalent to our day which might bring all this out for us it to imagine our Lord deciding to go and dine at the house of Bernie Madoff.

But something new has now happened!  Zacchaeus has been a problem to himself, a problem in which he has been trapped and lost, but now, in this moment of encounter with Christ, he does something different.  We are told that Zacchaeus stands there in the very midst of the grumbling and he proclaims to the Lord, “Behold, half of my possessions, Lord, I shall give to the poor, and if I have extorted anything from anyone I shall repay it four times over.”  In the encounter with Christ a new way is found!  The starkness of sin, violence and separation is broken through!  The problem that we become to ourselves through sin is broken through!

“And Jesus said to him, ‘Today salvation has come to this house because this man too is a descendant of Abraham.  For the Son of Man has come to seek and to save what was lost.”  In sin, humanity turns in on itself; we become problems to ourselves – a problem that we, on our own, have no hope of solving.  There is a depth to our brokenness that only God can answer.  It is in the gift of grace, the encounter with Christ, that a new way is found … for each and every one of us.