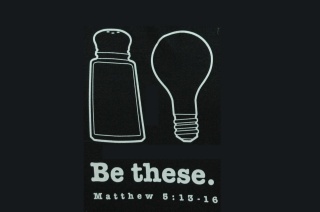 In Matthew 5:13-16, our Lord gives us two very distinctive images for what it means to live the life of discipleship – salt and light. We can say that part of the distinctiveness of these images is that both express a sense of “straightforwardness”.

The taste of salt is immediately known. It is not a flavor content to hide under other flavors. When salt is there the effect on the taste of something in unmistakable. The same can be said for light. It also is immediate in its effect. Either it is there or it is not. When light shines in a dark space it is known. Both salt and light are straightforward in their nature.

St. Augustine, in a commentary on psalm 112 (the psalm which we hear this Sunday) reflects on the similar straightforward nature of discipleship. Augustine contrasts the straightforwardness of the disciple with the ones who stumble in their envy of the sinner or who feel that their good deeds perish and are of no worth unless they receive some perishable reward in return – such as acknowledgement and the flattery of others. But the disciple who is straightforward is the one who does the good because it is the right thing to do – whether noticed by others or not. The disciple “neither seeks the approval of other people nor covets earthly riches…”

In his words to his disciples our Lord is very specific. “You are the salt of the earth…” “You are the light of the world…” This straightforward nature of discipleship is already within – it has been placed there by God’s grace in baptism; we are sons and daughters of God! This truth does not have to be earned or gained. It is already present in the very makeup of who we are!

We, on our part, have to trust, believe and live it out. We must overcome the temptation to limit ourselves by the narrow horizons that we, our world and our own painful experiences set. “Salt losing its taste…”, and “light being hidden under the bushel basket” is, in fact, our giving in to our limited horizons and not living according to fullness of God’s horizon. As Nelson Mandela once remarked, “Our playing small does not serve the will of God!”

We are the salt of the earth … we are the light of the world … we are straightforward in our living according to the horizon that God has set for us.