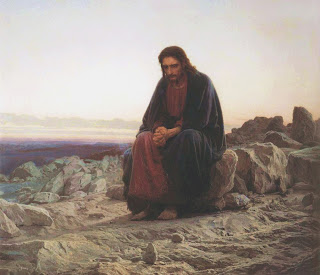 As we begin this season of Lent the Church wisely (in the readings chosen for this Sunday) calls us back to the “big picture” because it is in the context of the “big picture” that we are to live these next forty days in preparation for the celebration of Easter.  The “big picture” is this: we are created good, marked by sin, redeemed by Christ.

There is a misunderstanding regarding Christianity present in our world and this misunderstanding has roots both in those who are opposed to Christianity and religion in general and also in some Christians themselves who lack a full understanding of the faith.  The misunderstanding is that Christianity holds creation in contempt and sees it of having little or no worth.  This notion flies directly in the face of biblical evidence.  This Sunday’s first reading from the Book of Genesis (Genesis 2:7-9,3:1-7) reminds us that after God created all, after God made man and woman in his own image then God says, “It is good!”  Further, Christianity alone among all the world’s religions has the Creator of the world himself entering into creation in the person of the Son.  No other religion has this movement; the Creator stepping into creation.  We are created good…

But there is a nuance, creation is marked by sin.  Here the Christian faith is realistic and not naive in its understanding of the whole of the human condition and even each of our own unique experiences.  We see it throughout history and we know it in our own lived experiences – that there is something fundamentally off-kilter in the human condition.  “Brothers and sisters,” writes Paul, “through one man sin entered the world, and through sin, death, and thus death came to all men, inasmuch as all sinned.” (Rom. 5:12)  Sin and its effects are present in our world and our lives but (and this is an extremely important qualification) sin is neither the first nor the last word.

We are made good by God, we are marked by sin, we are redeemed by Christ.  In this Sunday’s gospel (Mt. 4:1-11) Christ the God-man, “who, though he was in the form of God … emptied himself, taking the form of a slave…” (Phil. 2:6-7), is led by the Spirit into the desert where he is tempted by the evil one.  It is important to note that Christ overcomes each temptation which he is presented with not by calling on his own will to power (remember in Christ the Son “emptied himself, taking the form of a slave…”) but rather, he overcomes each temptation by remaining and choosing to remain in relationship with the Father through the Holy Spirit in the very context of the weakness and need of his humanity.

We are redeemed in Christ.  In Christ we are, once again, brought into relationship with the Father and made sons and daughters of God and we are given the Holy Spirit that we might remain in relationship.

As we begin this season of Lent (this time of preparation for Easter) we are given the big picture which should underlie and inform all that we are about these next forty days and in fact all our lives as Christians.