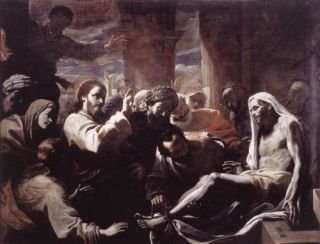 It is interesting to note how in this gospel passage of the raising of Lazarus (John 11:1-45) Jesus is met with confusion, contradiction, shock, grief, regret and fear (a whole gamut of reactions) as he journeys toward the tomb of his friend.  The disciples do not understand – thinking Lazarus was only asleep.  Both Martha and Mary at separate instances remark, “Lord, if you had been here…” voicing the regret so common at the death of a loved one.  The weeping of the crowd and the tears of the family giving expression to the death of hope when faced with the starkness of the tomb.  “Why roll back the stone?  It will be awful and certainly useless.”  Is all of this not the human condition as we stand before the tombs of our lives and all the tombs of our world?

But the gospel message is this: Christ enters into all of this.  Our Lord does not deny any of these reactions to death and to the tomb.  Neither does he ask us to pretend that these reactions on our part do not exist.  We are fearful before the tombs of our world!  We are lost and confused!  Death does not make sense!  We do know grief and regret!  Our Lord does not deny any of this but what he does do is that he comes to us in the very face of the tomb and all that it stirs up within us and asks, “Do you believe?”  Not, “Believe and you will never know hurt nor loss nor pain.” but “Even now when faced with the tomb, do you believe?”
﻿

﻿
This last week Sr. Helen Prejean gave a lecture on the death penalty at ETSU.  Sr. Helen has devoted her life and energy to ministering to people on death row as well as the families of victims of unimaginably horrific crimes.  This little Cajun nun with a broad smile and an easy-going nature stands before the tombs of our world.  How does she do that?  Where does she find the strength?  As I listened to her talk I heard her say in her own way that she has met Christ on death row and that she as a disciple has given her own answer to his question, “Do you believe?”

Some have referred to religion as an “opiate for the masses” – a way to avoid the stark realities of existence.  True Christianity is not an opiate.  Are there false versions of Christianity?  Yes, it is easy to see them at work in our time.  In these false versions of Christianity true faith means worldly success, wealth, getting what you want and never knowing true suffering.  It promotes a praise/paid mentality – the more you praise, the more you get paid.  This false reading of the Scriptures does seek to reduce the Christian message to an opiate for the masses but it is not the true gospel.  (Also, in fairness, I would contend that there are also a plethora of secular “opiates for the masses” that are at work in our world.  Lets not fool ourselves – these secular opiates also, through their own mechanisms, seek to numb people to the stark realities of existence.)

True Christianity acknowledges the tombs of our lives and our world.  The disciple is able to go to the tomb and even there (in the very midst of all that the tomb stirs up within us) is able to live an answer to that fundamental question of our Lord, “Do you believe?”  And it is in the living of the mystery that the disciple is brought to an awareness that in our belief we will indeed see and know the glory of God.