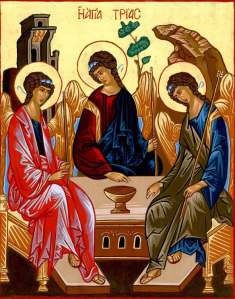 Memorial Day was officially proclaimed on May 5, 1868 by General John Logan, national commander of the Grand Army of the Republic, in his General Order No. 11, and was first observed on May 30, 1868, when flowers were placed on the graves of Union and Confederate soldiers at Arlington National Cemetery. The first state to officially recognize the holiday was New York in 1873 … Memorial Day is not about division. It is about reconciliation; it is about coming together to honor those who gave their all.  (taken from http://www.usmemorialday.org/)

There is much talk today about how we live in such polarized times as a country (red states vs. blue states, this group vs. that group) and as Church (traditionalists, orthodox vs. liberal – however you may wish to define any of these terms) but what more polarized time (at least in our country’s history) could there have been than immediately after the Civil War?

The day we observe today came about as an opportunity to heal divisions and regain unity.  Memorial Day has much to teach us both as a nation and as Church (for whether we like it or not all the baptized are members of the Body of Christ.)

Polarization does not serve the unity of the Church.

In the polarized context of our times I think it all the more important to give a listening and truly attentive ear to what Blessed John Paul II wrote in his famous encyclical on the priesthood, “Pastoris Dabo Vobis” (“I Will Give You Shepherds”).

John Paul specifies that priests are to be “men of communion”.  He plants this understanding right in the very communion of the Trinity.

“The priest’s identity,” as the Synod Fathers wrote, “like every Christian identity, has its source in the Blessed Trinity”, which is revealed and is communicated to people in Christ, establishing, in him and through the Spirit, the Church as “the seed and the beginning of the Kingdom”…

In this way the fundamentally “relational” dimension of priestly identity can be understood.  Through the priesthood which arises from the depths of the ineffable mystery of God, that is, from the love of the Father, the grace of Jesus Christ and the Holy Spirit’s gift of unity, the priest sacramentally enters into communion with the Bishop and with other priests, in order to serve the People of God who are the Church and to draw all mankind to Christ in accordance with the Lord’s Prayer:  “Holy Father, keep them in your name, which you have given me, that they may be one, even as we are one … even as you, Father, are in me, and I in you, that they also may be in us, so that the world may believe that you have sent me” (Jn 17:11,21).

Pope John Paul II, later in his encyclical, then goes on to reflect on the value of communion in the human formation of priests.

Future priests should therefore cultivate a series of human qualities, not only out of proper and due growth and realization of self, but also with a view to the ministry.  These qualities are needed for them to be balanced people, strong and free, capable of bearing the weight of pastoral responsibilities.  They need to be educated to love the truth, to be loyal, to respect every person, to have a sense of justice, to be true to their word, to be genuinely compassionate, to be men of integrity and, especially, to be balanced in judgment and behaviour…

Of special importance in the capacity to relate to others.  This is truly fundamental for a person who is called to be responsible for a community and to be a “man of communion”.  This demands that the priest not be arrogant, or quarrelsome, but affable, hospitable, sincere in his words and heart, prudent and discreet, generous and ready to serve, capable of opening himself to clear and brotherly relationships and encouraging the same in others, and quick to understand, forgive and console (see also 1 Tim 3:1-5, Tit 1:7-9).  People today are often trapped in situations of standardization and loneliness, especially in large urban centres, and they become ever more appreciative of the value of communion.  Today this is one of the most eloquent signs and one of the most effective ways of transmitting the Gospel message.

I believe it extremely important that today priests be known as “men of communion” and I believe that Blessed John Paul II also believed this.  I think that the above quotes testify to this.

The words found in the last sentence quoted are truly powerful and bear great weight.  In a time of polarization and isolation; being a “man of communion” is indeed one of the most eloquent signs and one of the most effective ways of transmitting the Gospel message.

The Church, by its very nature established in the heart of the Trinity, must be a place of communion and priests must strive to serve communion.

In all times and seasons, we as Church set our lives not by the limits and sad resignations of this world (i.e. polarization) but the truth and communion of the Kingdom of God.