Today, on the first full day of the Catholic Center mission trip in El Salvador, our group was able to attend Sunday Mass at the chapel where Archbishop Oscar Romero was killed on March 24, 1980.  I was privileged with the opportunity to concelebrate the Mass in the chapel.  It was truly a humbling experience to stand where such a great man had so often stood and prayed and where he gave his life in witness to his faith in Christ and his desire for peace.

Following the Mass a Carmelite sister of the community spent some time with our group as well as a group of El Salvadorian youth and told the story of Monsignor Romero’s life and the story of the day he was killed.

At the beginning of her talk she asked all those present to give a one word description of Monsignor Romero.  Some words shared were, “faith”, “courageous”, “hope”, “humble”, “kind”, “compassionate” and the list went on. 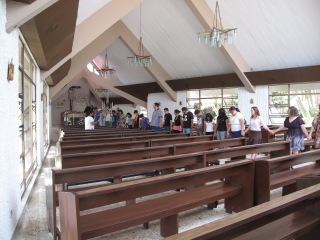 The sister shared how the assassination took place.  During the weekday Mass a car pulled up and stopped before the open front doors of the chapel.  Archbishop Romero had just finished his homily.  A rifle pointed out a window of the car and a bullet was shot down the aisle of the church hitting the archbishop in the chest severing his aorta.  The bullet was of such kind that it exploded in his chest.  The archbishop died.

At the end of her talk the sister then asked each person to once more share their word and this time come to the main aisle in order to hold hands and form a line stretching from the altar to the front doors of the chapel.  (The sister asked me to share my word first so I was able to place my hand on the altar.)

Once we were all in a line we were asked to reflect on the fact that this was the path of the bullet as it sped toward the archbishop.  It was in many ways a path of death but, as our words reflected, also a path of resurrection and hope.  It reflected both the way of the cross and the triumph of the resurrection.

There is hope that one day Archbishop Oscar Romero will be officially canonized a saint of the Church but as sister told me later as we toured the Archbishop’s residence; he is already considered a saint by the people of El Salvador – the people he loved.