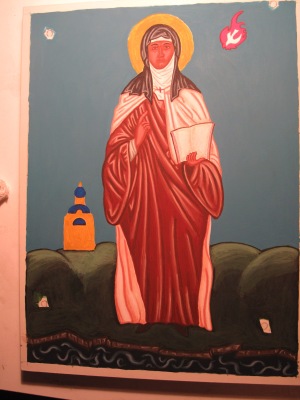 In her section on the Fourth Dwelling Places in The Interior Castle, St. Teresa draws a distinction between two movements in the life of prayer: consolations and spiritual delights.  Basically, consolations have their origin in us.  Consolations are experiences that are acquired through our own effort – our petitions and our prayers.  They move from us to God and as long as they end in God they are good and beneficial.
Spiritual delights, on the other hand, have their origin in God and move to us.  Spiritual delights are specifically movements of God’s grace that catch us and are not controlled by us.  They come in God’s time and in God’s plan.  Spiritual delights bring a peace and stillness to the soul that fulfills and expands our hearts.  They can even come in the busiest and noisiest of circumstances.  For a moment, even as we might be busy about other things and thoughts, we are brought to a different level of awareness.  (As I read this section by Teresa I was reminded of the distinction laid out by Josef Pieper between acquired knowledge and received knowledge in Leisure as the Basis of Culture.  I think that a connection can be made at this juncture between Teresa’s thought and that of Pieper but this is not the place for that.)
There is much to reflect upon in this distinction of the two movements of prayer but one thought that strikes me is that spiritual delights remind us that God is active in our lives and that there is such a thing as providence.  There is a form of Christian thought that says God created us and the world, God saved us from sin, God has given us salvation in Christ and his word in Scripture and now it is up to us to take all this and live a good life basically on our own.  God is God yet God remains separate and distinct and not really active in my life.  Acknowledged or not, I think that many people have this perspective on the Christian life.  It is a “Christianized” form of secularism – God is acknowledged but God really does not move within the secular realm.
Spiritual delights stand in opposition to this take on the Christian faith.  They demonstrate that God is active and that God moves as God so chooses.
Not too long ago I read an observation which held that in the West we are all “adult children of the Enlightenment,” which means we have all been washed thoroughly in a perspective of reality that is quite comfortable with keeping God “out there” and us “here”.  Teresa was never a child of the Enlightenment and her writings give us a different and needed perspective.  In fact, I would contend that any Catholic who is worth his or her salt and understands what sacrament and grace are all about would never be truly comfortable in the restrictive confines of a worldview that too readily separates the sacred and the secular.
Isn’t it interesting how revolutionary prayer is when we really delve into it?  Oftentimes we have  an image of the revolutionary as the protester on the street shouting his or her slogan and carrying his or her particular sign but in essence working out of the same perspective as the ones they are protesting against.  Maybe the real revolutionaries are monastics and those people truly dedicated to the life of prayer and the true hotbeds of revolutionary dissent are to be found in monasteries and convents.             ﻿