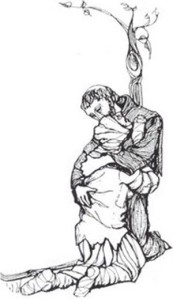 In the Hebraic thought in which the writings of Old Testament were written the heart was viewed as the center of knowledge and willing and not as the center of romantic love as we tend to envisage it today. This distinction can help us in realizing the true import of the scriptural motif of “creating a new heart” as found, for example, in this passage taken from the Book of the prophet Jeremiah:

To have a heart transformed by the Lord is to have the center of our willing and our knowledge (i.e. our choices and our actions) transformed by an awareness of the presence of God. If the conversion of our hearts is true then how we act and how we live in the world and with one another must be affected and purified.

Temperance is a virtue not readily understood nor applauded in our day and time. Over and over again we hear the message of: “live life to the full!”, “Do what you want.” and if something is to have any true worth and merit then it must be “extreme”. Where does temperance fit it with this? Temperance, it seems to me, neither automatically condemns nor condones the possibilities that life puts before us.

Temperance is the moral virtue that moderates the attraction of pleasures and provides balance in the use of created goods. It ensures the will’s mastery over instincts and keeps desires within the limits of what is honorable. The temperate person directs the sensitive appetites toward what is good and maintains a healthy discretion: “Do not follow your inclination and strength, walking according to the desires of your heart.” (Sir. 5:2) Temperance is often praised in the Old Testament: “Do not follow your base desires, but restrain your appetites.”(Sir. 18:30) In the New Testament it is called “moderation” or “sobriety.” We ought “to live sober, upright, and godly lives in this world.” (Titus 2:12) (CCC #1809)

Temperance is not opposed to desire but it does say that we are more than our desires and this is a recognition that seems to be sorely lacking in our current social climate. Despite all its protestations to the contrary; a “desire only” approach to life denies the true dignity and capability of the individual. We are more than our desires whether they happen to be desires of attraction or desires of repulsion.

Here, I would like to suggest a historical figure for consideration whom, I believe, stands as a model for temperance (but maybe not in the way we would think). Before his conversion the young St. Francis was a well kept and in many ways self-absorbed young man, the son of a rich merchant. It is said that Francis had a strong aversion to lepers. He was repulsed by them and this “desire” controlled his reactions and encounters with lepers. He would do all he could to avoid encountering any leper at any time. After some sobering experiences in life and as the possibility of a life of service to the gospel began to grow in Francis he realized that the desires of his life were holding him back. He knew he had to gain mastery over his self in order to continue on the spiritual journey but he was at a loss on how to do this. Out riding one day, Francis met a leper on the road whose soars were so loathsome that the young man was horrified. Every “desire” in Francis at that moment was of revulsion and told him to avoid the leper at all costs. But, Francis did the exact opposite. He dismounted from his horse and he kissed the leper.

Temperance “ensures the will’s mastery over instincts and keeps desires within the limits of what is honorable.” (CCC # 1809)

Whether they be desires of attraction or desires of repulsion; the virtue of temperance enables us to live lives that show deep respect for the other person and to strive for what is honorable and good. When so much in his being was telling Francis to run he showed great respect to the leper and chose to act in such a way as to keep his desire (of repulsion in this instance) within the limit of what was honorable. To have avoided the leper would have been the dishonorable thing to do.

The virtues will not allow us to sell neither ourselves nor one another short.

The temperate person directs the sensitive appetites toward what is good and maintains a healthy discretion: “Do not follow your inclination and strength, walking according to the desires of your heart.” (Sir. 5:2) (CCC #1809)