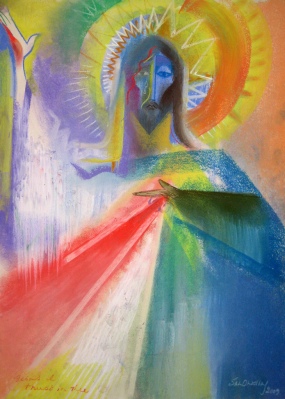 Thomas was not a bad man nor was he a second-rate apostle.  Rather, Thomas was a man who had been hurt, a man whose hopes had been crushed.  Thomas believed in Jesus.  He had followed Jesus and had made the decision to set his life by Jesus.  Now, Jesus had been killed.  The weight and injustice of the world had crushed Thomas’ hope.  So Thomas says, “Unless I see the mark of the nails in his hands and put my fingers into the nailmarks and put my hand into his side, I will not believe.” (John 20:27)

Every Sunday when we gather for the Mass we profess the creed.  What Thomas says in today’s gospel, “Unless I see the mark of the nails…” is, in fact, a non-creed and it is a non-creed professed by many people in our world today – not necessarily evil people but people who are prisoners of themselves and of their own sensations.  Thomas, at this moment, was egocentric and lost in himself because he was lost in his own pain and crushed hope.  He was focused inward – solely on himself.  Even when the other disciples say, “We have seen the Lord!” he will not believe because he is so imprisoned within himself.  Thomas will not even entertain the possibility.  Egocentrism always leads one to unbelief – one becomes a prisoner to ones own sensations and cannot believe in anything else.

Many people in our world live this way.  We, ourselves, know the temptation to live this way.  The temptation is always there to shut the doors, to turn in on ourselves, to live egocentric lives and to allow the entrance of only a select few, if even that.  The danger is that egocentric lives easily become fear-filled and violent lives.  The “other” can quickly become the “enemy” and mistrust can settle in our hearts.  It is important to note that both times when the risen Lord appears in this Sunday’s gospel (Jn. 20:19-31) we are told that he easily passes through the locked doors and says, “Peace be with you.”  The resurrection demonstrates that there is now another way.  We do not have to live behind doors locked in fear.  We can know peace!

In the Divine Mercy apparition to St. Faustinia Jesus reveals his Divine Heart and the abundance of mercy which flows from it.  In today’s gospel the risen Lord frees Thomas from the prison of his egocentrism by touching Thomas’ heart.  Jesus does not craft a well-reasoned argument or lesson for the unbelieving Thomas; rather, the risen Lord shows Thomas the marks of evil on his own body in order that Thomas might learn to turn away from self in compassion and be moved both by his wounds and the wounds of the least of his brothers and sisters.

We are believers when we are touched in the heart, when we are moved at the sight of the wounds caused by evil and when we learn not to trust in ourselves and be focused solely on ourselves but to trust in the truth and energy of the resurrection and the divine love and mercy the flows from the gospel and that heals and frees from evil.

Help us to open the doors of our hearts.

Our Lord and our God!

(Parts of this reflection are inspired by and taken from the homily for the second Sunday of Easter given by Bishop Vincenzo Paglia as found in The Word of God Every Day.)