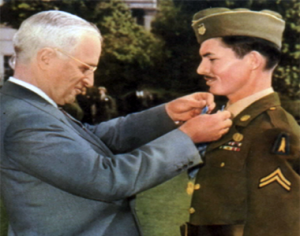 The movie “Hacksaw Ridge” is a powerful and true story about a man holding firm to his convictions in the face of strong opposition.  Desmond Doss was a conscientious objector in World War II.  Guided by his Christian faith and a personal vow he made to God, Doss would not pick up a gun but he wanted to help his country in the war effort as a medic.  The first half of the film is about the opposition he faced in the army itself.  He was viewed as a coward and his superiors and even fellow soldiers tried to force him out.  The second half of the film is about how Doss proved his courage in the face of battle.  When his unit was forced to retreat due to an overwhelming onslaught of Japanese soldiers, Doss remained and under the cover of night and early morning rescued seventy-five wounded soldiers.  His prayer throughout that heroic effort, each time he went back onto the combat field was, “Dear God, let me get just one more man.”  Corporal Desmond Doss was the first and only conscientious objector to be awarded the Medal of Honor for his heroic bravery above and beyond the call of duty.

I recently read in a commentary that in Christ, “God works his plan not in the extra-ordinariness of miracles or in the mystery of esoteric magic, but in the ordinariness of mercy and in the mystery of compassion.”  In today’s gospel (Mt. 1:18-24) we are told how the birth of Jesus Christ comes about.  Mary is found with child.  Joseph, a righteous and merciful man, decides to divorce her quietly.  But, in a dream, an angel comes to Joseph and tells him to have no fear; that the child is conceived through the Holy Spirit and the child will reveal that God is with us.  Joseph took Mary into his home.

It is important to remember that both the annunciation and Joseph’s dream were private.  Only Mary saw the angel Gabriel.  Only Joseph had the dream.  We know the rest of the story but then, at that moment and in those confusing days, it was not known.  There must have been gossip.  The scandal of a pregnancy outside of marriage and the foolishness of Joseph taking Mary into his home when a truly righteous man and observant Jew would have done no such thing!  The stigma probably did not end with the birth of the child either.  It probably always hung around the Holy Family, it probably followed Joseph to his death bed and it was probably whispered about Christ his whole life.

In the gospels Joseph speaks no words but his actions and willingness to live by his convictions whether understood by other people or not say volumes about the foster-father of our Lord.  Both Mary and Joseph, in their own way, said “yes” to God and they entered into that mystery of mercy and compassion where God’s will is known and made manifest.  Yes, there were some signs that we will hear of in the next few weeks – a shining star, a vision of angels, wise men from the East – but for the vast majority of the world all was ordinary but in that “ordinary” the most extra-ordinary was occurring.  God was coming to be with us.

There is a scene in “Hacksaw Ridge” when the troop is retreating and Corporal Doss is at the top of the ridge.  He cries out, “God I cannot hear you!  What do you want me to do?”  There is a silence for a moment as the medic sits in the violent ordinariness of war and then he says for the first time of seventy-five times, “Dear God, let me get just one man.”  Corporal Doss then runs back into the battlefield.  It was not esoteric or other-worldly it was just the mystery of mercy and compassion being lived in the moment.

We should neither disdain the ordinary nor the choice to live our convictions of faith in the ordinary.  Mary, Joseph and a host of witnesses like Corporal Doss show how God is found and his will is made known in the ordinary – whether understood by other people at the time or not.

St. Joseph, foster-father of our Lord, pray for us.

St. Joseph, help us to learn your humility, your conviction and your wisdom.