All Saints, Beloved sons and daughters, Feast of All Saints, God as Father 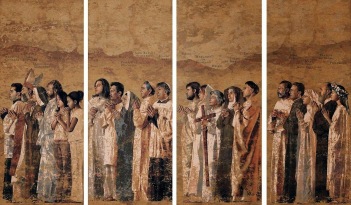 Maybe it is just the time of the year but lately I have been thinking about people I have known in my life and the influence they have had on me. I can say that I have been blessed with having good people in my life. One such person was Billy. During the latter years of high school and into college I worked in the maintenance department of Appalachian Oil Company (Appco). This was the family business. It began as Cummins Oil Company (started by my grandfather) and grew to Appco. The company was located in Blountville and every morning the maintenance crews would meet there to get our jobs from our supervisor Mr. McCoy and then go throughout the Tri-Cities to the different gas stations and convenience stores we serviced.

Billy was a soft-spoken, down to earth man who spent his whole life working for the company. He walked with a limp but he was as strong as an ox and he knew how to fix just about everything. Billy was a born again Christian, he played in a gospel band, he didn’t put up with cussing or gossip and he always had the music in his maintenance truck tuned to a Christian station. I remember one of the things he used to often say was, “The only mistake you can make is not learning from a mistake.” For all these reasons, primarily the no cussing and no bad talk rule and the gospel music in the truck, the rest of the maintenance crew (who were not so devout) did not really care to be paired with Billy on maintenance runs. Strangely though, these things never bothered me … go figure … so often Mr. McCoy would assign me to work with Billy.

I remember one day we were driving to Mountain City to repair some gas pumps at a store and Billy shared his conversion story with me. Apparently, he had quite the wild life which was fun for a while but then quickly turned sour and he was seriously close to losing his wife, his family and his job. As we were driving along I remember Billy saying, “At that time I did not know who I was anymore.” He knew he had to change and that next Sunday he went to church and was, as he said, “born again”. And Billy lived it; it was not just a pat phrase for him.

This last week the priests of our diocese were together on retreat and, as you may expect on a priest retreat, there were very high theological discussions. At one point our retreat director (a priest from Brooklyn) shared a scene from that truly theological masterpiece – Disney’s “The Lion King”. It was the scene where the young Simba is lost and confused after the death of his father. He is led into the wilderness by the wise baboon and he has a vision of his father. In the vision the father challenges Simba and says, “You have forgotten who you are and so you have forgotten me … Remember who you are. You are my son!” Simba remembers and knows what he must do but he knows it will be hard to face his past. To this the wise baboon says, “Yes, the past can hurt … you can either run from it or learn from it.” (“The only mistake you can make is not learning from a mistake.”) 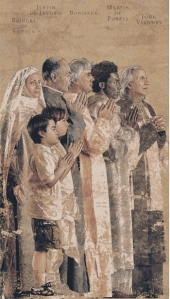 Today the Church celebrates the Feast of All Saints where we honor all those men and women (recognized by the Church or known only to God) who truly and authentically witnessed to Christ in their lives. In the First Letter of John we hear, “Beloved: see what love the Father has bestowed on us that we may be called the children of God. Yet so we are … we are God’s children now…” Whether they came to the realization early in their lives or late in their lives, all the saints share this common awareness: “…we are God’s children now…” By remembering who their Father is, they learned who they were. When we remember who our Father is, we learn who we are. Further, it is when we remember who our Father is and who we are that those moments/attitudes named by our Lord in the beatitudes become “blessed” – not just a moment to endure and get through but truly a source to deeper awareness and a path to the Father and the Kingdom.

Today we celebrate the saints – those publically recognized by the Church whom we should cultivate friendship with and those who are known only to God and perhaps to a few people who had the privilege to encounter them. The saints remind us of who our Father is and who we are meant to be. And they teach us that amazing truth that, yes, each of us are also called to be saints.