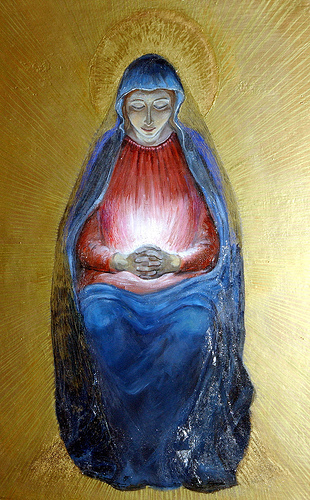 Two things struck me as I prayed over the gospel this past week. The first is when Luke tells us that Mary entered the house of Zechariah and greeted Elizabeth.  I found myself returning again and again to that scene in my imagination.  How joy-filled it must have been!  Mary stepping into this house which for too long had been barren of the sound of new life, the sound of children.  Elizabeth said that the child in her womb leapt for joy at the sound of Mary’s greeting – a confirmation of what the angel had promised Zechariah.  What was thought barren will now bring forth life and it will be a life that, in turn, will proclaim the coming of the Messiah!  For nothing is impossible to God.

Mary comes to Zechariah and Elizabeth not as we are, weakened and wounded by sin, rather she comes as God would have us. On December 8th we affirmed that Mary is the Immaculate Conception.  In a great mystery she is preserved from sin.  In Mary we see not the exception but in fact the true norm – the human condition as God intends.  Mary reveals our true nature and dignity where sin obscures, denigrates and denies.  The very presence of Mary reveals that sin and evil are, in fact, the exception and will always be so.  Sin and evil have no true power.  Sin and evil can destroy and tear down life but they can never bring forth new life.  God alone is the author of life.

Mary is the true missionary of hope and Mary stands as the great witness to the impotence of evil.

The second thing that struck me is when Elizabeth proclaims Mary “blessed” because she believed that what the Lord had spoken to her would be fulfilled. Someone recently asked me if Mary could have said “no” to the angel Gabriel and refuse God’s request.  Mary certainly had free will in that moment and it was a free will untainted by original sin.  Mary chose to believe.  Despite all things to the contrary – the darkness and violence of the world, the confusion of what the angel’s words meant, the scandal that would be in the eyes and thoughts of people – Mary chose to believe that what God had spoken to her would be fulfilled.

This last Sunday of Advent, standing before the celebration of Christmas, Mary witnesses to us the true impotence of evil and that God alone is the author of life. Mary also witnesses to us the choice to believe that what God has promised God will fulfill.  We need to live the hope of this season and we need to learn from Mary how to be missionaries and witnesses of hope.

Recently Archbishop Joseph Kurtz (current president of the U.S. Conference of Bishops) shared the following words in a statement regarding the violent times we find ourselves in and how we are to respond as Christians.

We must not respond in fear. We are called to be heralds of hope and prophetic voices against senseless violence, a violence which can never be justified by invoking the name of God. Watching innocent lives taken and wondering whether the violence will reach our own families rightly stirs our deepest protective emotions. We must resist the hatred and suspicion that leads to policies of discrimination. Instead, we must channel our emotions of concern and protection, born in love, into a vibrant witness to the dignity of every person. We should employ immigration laws that are humane and keep us safe, but should never target specific classes of persons based on religion. When we fail to see the difference between our enemies and people of good will, we lose a part of who we are as people of faith. Policies of fear and inflammatory rhetoric will only offer extremists fertile soil and pave the way toward a divisive, fearful future. As Pope Francis reminded us in his speech to Congress: “The yardstick by which we measure others is the yardstick by which time will measure us.”