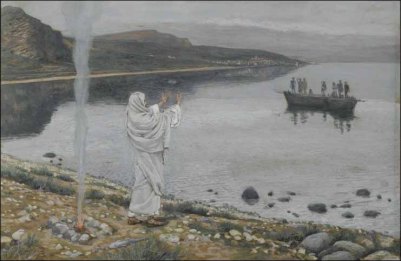 It is interesting to note how the disciples react in the gospels when they encounter the risen Lord. They all have this very interesting reaction of a mix of great joy and amazement but also fear and uncertainty.  They rejoice that Jesus is risen and alive but yet they remain locked behind closed doors out of fear of the religious authorities.  The tomb is emptied yet they know that the powers of the world are seeking to persecute and destroy them because they are the followers of this Jesus of Nazareth.  It was true for the first group of followers and it remains true today.

It is also interesting to note how the risen Lord responds to this mix of emotions on the part of his followers. He does not respond by given them a blueprint or map if you will.  The risen Lord in all of these encounters never tells them how things will go or what will happen, how they will witness to him or where it will take them rather all that he continually says is to rejoice in the resurrection and to trust in him.

A scene from the movie “Risen” has remained with me these past few weeks. In the movie the Roman tribune at the center of the story has seen the risen Lord and his world is turned upside down.  He is following along with the disciples and at one point he is with them as they are rushing to Galilee because Mary Magdalene had told the disciples that Jesus had said he would be there waiting for them.  The tribune is running alongside Peter and they both stop to catch a breath.  The tribune asks Peter what he thinks they will find in Galilee and Peter says, “I don’t know.”  Perplexed by this, the tribune then asks him why he is going if he does not know what they will find and Peter responds, “Because I trust.”

Those first disciples, when all the powers of the world were arrayed against them, had nothing other than joy and amazement at the resurrection and trust. It was enough for them and frankly, it is enough for us.  We also have the joy of the risen Lord in our hearts yet we also know fear and uncertainty.  We also do not know where it is all going.  There are also powers arrayed against us.  Christ does not give any one of us a blueprint or a map; rather he gives us some things much more worthwhile – his very resurrection and the call to trust in him.

We find in this Sunday’s gospel (Jn. 21:1-19) that there are also two other things given to aid the disciples in their journey throughout history. One is community – the Church.  The disciples are gathered together again at the Sea of Tiberias and this is not just coincidence.  Peter says that he is going fishing and the others respond that they will go with him.  Together, they all get in the boat.  Scriptures tells us that where two or three are gathered together, there is our Lord in their midst.  It is when they are together and all of them hard at the work of fishing that our Lord appears to them.  The life of Christian faith is not meant to be lived alone.  We encounter the risen Lord together.  Community and the Church are not optional for the Christian, rather they are a source of encounter with the risen Lord.

The other great gift given to the Church in this gospel and a continual way to encounter the risen Lord is the call to charity. Three times our Lord asks Peter if he loves him.  Three times Peter says “yes” and the risen Lord responds with, “feed my lambs … tend my sheep … feed my sheep.” It is a call given to the whole Church.  It is also a gift.  When we feed and tend one another, especially the most vulnerable and poor in our midst, then we meet the risen Lord and we are graced and strengthened in our encounter.  The powers of the world do not understand this and they never will but there is a great power, perhaps the greatest, given to the poor and the vulnerable.  When we live charity, we encounter the risen Lord.