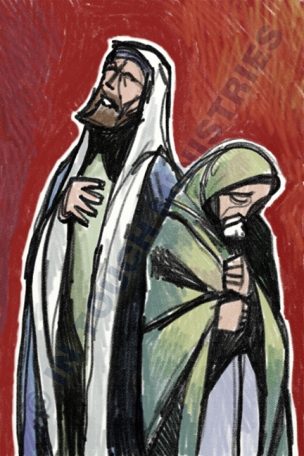 There are two things that the Pharisee in today’s gospel (Lk. 18:9-14) did not know – two things that kept him from entering into true relationship with God.  This man, who prided himself on his religious observance and his fulfillment of his commitments in life, neither knew himself nor did he really know God.  The tax collector, on the other hand,  knew both and he went home justified.

There are two little short stories to share that can draw this out.  The first story is about an elderly, retired priest who was absolutely venerated in his small town for his kindness and holiness.  The priest was a member of the local Rotary club and he never missed a meeting.  Well, one day he did not show for the monthly meeting and he even seemed to disappear for a while.  No one knew where he was.  The next month there he was at the meeting again.  “Father, where have you been?” people asked.  “Well,” the priest responded in an embarrassed way, “I just finished serving a thirty day prison sentence.”  “What?  You wouldn’t hurt a fly!  What happened?”  “The story is complicated but to sum it up; I had bought a train ticket into the city.  I was standing on the platform when this stunningly beautiful woman appeared on the arm of a cop.  The woman looked at me and then turned to the cop and said, “He did it!  I’m certain he is the one who did it!”  Well, to tell the truth, I was so mesmerized and flattered, I pleaded guilty.”

There is a touch of vanity in the holiest men and women and they see no reason to deny it.  When we are honest we must admit that we are indeed a bundle of paradoxes: we believe and we doubt, we hope and are discouraged, we love and we hate, we are honest and we play games.  Honesty requires that we admit the dark as well as the light within ourselves (and the saints teach us how to laugh about what we find).  The Pharisee lacked this depth of honesty.  The tax collector, on the other hand, truly knew who he was – a man who had nothing to fall back on other than God’s mercy.

The second story witnesses to God and our ability to trust.  A two-story home catches on fire.  The father, mother and several children are rushing out when the smallest child becomes separated, gets frightened and rushes back upstairs.  The small child appears in a smoke-filled window crying.  The father shouts, “Jump son!  Jump!  I will catch you!”  The boy responds, “But I cannot see you!”  To which the father answers, “I know.  I know, but I can see you!”  The Pharisee, so focused on his own righteousness could not bring himself to jump.  He returns home not justified.  The tax collector, with head bowed, beating his breast, knowing himself a sinner and trusting in the goodness of God was able to jump into the mercy of God.  The tax collector returns home justified.