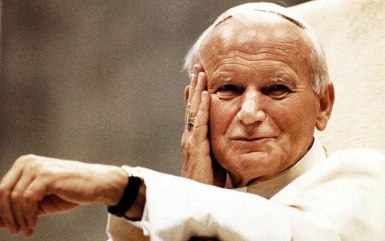 It is not just what we say but it is also how we say it that is important.  This is one of the many lessons I have learned from St. John Paul II.  Like so many others I have found great insight and wisdom in the writings of Pope John Paul II.  I first began to read the writings of this holy man during my time of seminary studies and his writings continue to inspire and challenge me to this day.  John Paul II certainly pointed out and challenged the errors and falsehoods of his time but he never fell into nor immersed himself in negativity and I believe that this is an important point.  St. John Paul II was always willing to point out the good in culture and in the world.  He did this time and again in his writings just as much as he challenged falsehoods.  This ability to recognize the good gives his writings and teachings an authenticity that others are often not able to achieve.

It also witnesses, I believe, to an enormous depth of spiritual awareness.  St. John Paul II knew the horror of evil and sin.  He witnessed it first hand in many ways throughout the twentieth century – from the brutality of Nazism and a Europe at war to the life-denying oppression of communism to the crassness of an over-arching materialism.  The Polish pontiff knew the face of evil but he knew something else even more.  He knew Jesus as Lord and Savior, risen from the dead, he knew (despite all the trials of the world) that God reigned in heaven and that God is bringing about his Kingdom and that the Holy Spirit leads us into new life.  Because of this, St. John Paul II could rejoice just as much in the good and triumph of his age as he could challenge its falsehoods and evils.  He did not allow the evil to eclipse the reality of the good that he recognized as he pondered in his heart and because of this he was a witness to hope in his time and will always remain so.

Christians of today ought to learn this great lesson that St. John Paul II has to teach us.  Yes, there is great evil, error and sin in our world.  Our Lord does not want us to be naïve to this.  We must name evil for what it is when we see it but we must not allow ourselves to fall into negativity in so doing.  We must avoid the temptation of becoming prophets of doom in our day and time.  The world is deeply wounded and scarred by sin but the world is God’s creation and Scripture tells us that God loves what he has created.  We ought to never despise which God looks upon with love.

Yes, there is a litany of horror in history but there is also a litany of the good.  Here are some aspects of the litany of the good more recent to our day.  An end to colonialism and the subjugation of native peoples, women gaining the right to vote and the ability to speak and achieve for themselves in society, the abolishment of widespread slavery and segregation, amazing developments in technology and understanding in all areas of science and medicine and the wonder that these advancements call forth, ecumenical advancements among Christians and greater understanding and respect among the world’s religions, greater (but not complete) healthcare access for people all around the world, a deeper and growing awareness of the beauty of creation and our call to be good stewards of the world entrusted to us and how everything is so interconnected, a greater awareness and respect for the dignity of every man, woman and child regardless of race, color, gender, language, sexual orientation, economic status and religion, a growing awareness of the dignity of all human life from the womb to a natural death and the list can go on…

Are there betrayals of each aspect of the above list?  Yes, people are still brutally denied their dignity in a variety of forms, science and medicine are often un-ethically manipulated in many ways, life is denied.  There remains war and violence.  But can it not be recognized that progress has been made and continues to be made in all of these areas and is there anything wrong in this recognition?  From my reading of St. John Paul II (limited as it is), I believe that he was very comfortable in recognizing and celebrating the achievement of the good.  He never allowed himself to get mired in negativity and the temptation of being a prophet of doom even as he certainly knew the struggles ahead.

St. John Paul II was the originator of World Youth Day – a wonderful world-wide gathering of young adults which the Church just celebrated this year in John Paul’s native Poland.  I wonder if he saw this gathering of the world’s young people as a regular inoculation (if you would) for the Church against the ever present danger and virus of negativism.  Negativism tramples down life and dreams, especially those of the young.  In some regards, saying “the world is falling apart and all is bad” while not recognizing the good which is happening is a back-handed way of saying to our young people, “you and your hopes and dreams and possibility don’t really matter.”  This is not true.  Just because the world as I may see it seems to be changing that does not mean that the “World” (capital “W”) is falling apart and frankly maybe my “world” does need to fall apart so that God can bring about more fully his vision for the World.  It is possible that my “world” was not really that great for all people.  Maybe our job is to trust in God rather than sit in judgment of history and do what we can today to love God and to love neighbor.

There is evil and there is great sin in our world.  We must not be naïve and we must pray for discerning minds and hearts and boldness of speech and action and we must also guard against becoming immersed in negativism.  At heart, a Christian cannot be a prophet of doom – God’s amazing grace will not allow it.  The first verse and refrain of the hymn “How Can I Keep From Singing” captures this truth.  My life flows on in endless song; above earth’s lamentation.  I hear the real though far-off hymn that hails a new creation.  No storm can shake my inmost calm, while to that rock I’m clinging.  Since Love is Lord of heaven and earth, how can I keep from singing?

Our God is a God of the living and not the dead.  To honor life and the good wherever it is found is to honor God.  St. John Paul II knew this.

St. John Paul II, pray for us!  Help us to learn not just what to say but also how to say it to a world so desperately in need yet also so loved by God.