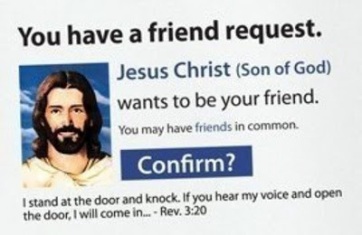 I just returned to Facebook after a short break and I took the break not because I think Facebook is evil and trying to control our thoughts – advertisers have been attempting this since the dawn of trade – and not because I don’t want to see people’s pets or what my friends had for dinner – I’ve posted both of these myself. (It’s interesting, I will post what I think is a thoughtful reflection and maybe get a few likes. I post a picture of my dogs and I get hundreds of likes! What’s up with that?!)

I took a break from Facebook because I was tired of the demonizing of the “other” (whoever that might be on whatever issue) that I often see, especially around political and social issues. The negativity is toxic and it does wound one’s soul I believe. I reckon the effect of viewing a steady stream of negative posts and memes on our psyche to being similar to being force fed an unceasing diet of bags of potato chips. It does nothing but leave a person’s soul and intellect bloated, obese and capable of only belching noxious gases in return.

I tend to believe that our Lord would not be on Facebook and not because he does not want to know what we had for dinner or our pet’s latest escapade but because we see throughout the Gospels how he values true encounter and true relationship. Although social media has positives – keeping people connected and sharing information to some degree – it is neither true encounter nor does it give space for real dialogue or for real friendship.

We are told in today’s Gospel that the people in our Lord’s “native place” – the ones who knew him and his family – took offense at our Lord when he returned and taught in the synagogue. “Where did this man get all this? What kind of wisdom has been given him? What mighty deeds are wrought by his hands?” These people preferred to stick with their “perception” of Jesus rather than take the risk of true encounter and true relationship with him in that moment which, by its very nature, challenges and changes people.

For this reason, Jesus was not able to “perform any mighty deeds there”. The gospel even says that our Lord, “was amazed at their lack of faith.” Our Lord was amazed and the people missed that opportunity for new life! No mighty deeds were performed there.

Avoiding Jesus, which can even occur within a life of attending Mass devotedly yet choosing to remain with our limited perception of who we think Jesus is rather than risking a true encounter with him, has effects. The opportunity of new life is missed and we, like the people in Jesus’ “native place”, are less because of it. Our Lord departs that place.

Our Lord desires true encounter and true relationship! He invites each of us to encounter him. Yes, it will challenge and change us … and it will give life.

Turn the screen off.

Take a walk outside.

Just have a face-to-face conversation with another human being.