During the weeks of Advent we hoped for and awaited the coming of the Messiah.  On Christmas we rejoiced in the birth of our savior.  Now, on Epiphany we travel with the wise men from the East in order to “do him homage”, in order to adore Christ.

Adoration is the proper attitude of today’s feast.  Just as the wise men reveal that the gospel message is meant to go out to all nations and peoples; it also reveals that all peoples and nations are meant to travel to Bethlehem and adore the Christ-child, and do him homage.

Gold is a proper gift to offer a king.  By offering gold the wise men were acknowledging the infant Jesus as the “newborn king of the Jews”.  Gold symbolizes the kingship of Christ.  Gold is our best that we offer to God in gratitude.  God loves us and God wants us to know and experience the joys and beauty of life.  In moments of joy and beauty, if we can just turn to God and say “thank you” then we are adoring, we are offering gold to God.  We ought to thank God for all the blessings, beauty and joys of life.  Gratitude is the gold we have to offer.

Frankincense accompanies worship and sacrifice.  It is the stuff of priests.  Christ is the High Priest who offers himself as the sinless lamb for us.  The gift of frankincense given at the birth of Christ is a foreshadowing of his great sacrifice and offering of himself on the cross.  We offer frankincense when we offer prayers and a desire to live in relationship with God.  This is part of the great mystery of our faith.  God wants relationship and friendship with us, God seeks us out.  When we are willing to live in relationship with God, when we make the time to pray and just be with God then we are offering frankincense for ourselves and for our world.

Myrrh is used to anoint bodies at burial.  Myrrh given at the birth of our Lord points toward the death Christ would suffer for us.  When we are willing to die to self for Christ, when we offer up our pains, sufferings, and even little annoyances of life we are, in essence, bringing myrrh to our Lord.  This also is adoration – to bring God our pains, sorrows, dying to self and the injustices we bear in life.

Today, we come to adore.  Epiphany teaches us how to adore our Lord and Savior – to bring our joys and gratitudes–this is gold; to bring our prayers and desire to live in relationship with God – this is frankincense and to bring our sorrows, dying to self and the injustices we bear in life – this is myrrh. 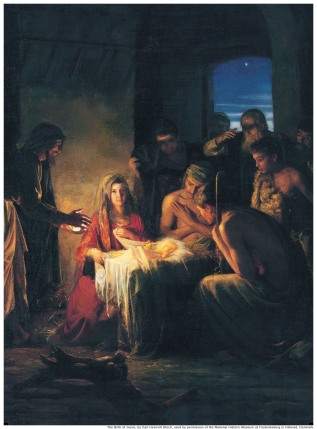 Caesar demanded a census and the whole world was in motion and turmoil.  People and families around the empire travelling to their own town.  The emperor had spoken and therefore it had to be!

Joseph and Mary – humble, poor, obedient to authority – travel to Bethlehem, even with Mary near child-birth.  They register for the census but the gospel does not specify one thing; did they register before the birth of Christ or after?  Did their census notation say, “one Jewish couple expecting a child” or “one Jewish couple with newborn male”?  I tend to believe that Joseph and Mary registered with the census before the birth of Jesus because it would be consistent with God’s way of working throughout scripture.

Let the powers of the world flex their muscle and show all their strength.  Peoples need to travel, life needs to be interrupted, Caesar Augustus wants a census!  God laughs.  God comes silently and humbly amidst all the turmoil of the time.  God even uses the great emperor’s project to accomplish His plan.  Who today remembers the census that Caesar ordered?  Yet all time and history celebrates the birth of the son of Mary.  Christ coming after the census is fulfilled demonstrates who is really the Lord of history.

Caesar in the exercise of his power and might through the census was trying to grasp and claim the entire empire.  “These … all these lands and peoples … are mine!” is what Caesar was saying through his census.  Christ being born after the census shows that he does not belong to the power of Caesar nor to any worldly-power yesterday or today.  Jesus will not go down in history as a small notation in a Roman emperor’s census, rather he will be revealed as the very one who ushers in God’s Kingdom to which all the kingdoms and powers of the world must submit.

The Word of God enters the world unexpectedly.  Information is power.  A census – a measurement of peoples – gives information and therefore it gives the emperor great power and control.  Yet right beyond the boundary of Caesar’s knowledge occurs the greatest event in all of human history and Caesar misses it.  Caesar has no knowledge of it.  The first ones who do come to know of it?  Not Caesar but rather the lowly shepherds – the poor and the insignificant ones in the eyes of the world.  It is to them that the angel appears and tells of this new thing that God has done!  “Do not be afraid; for behold, I proclaim to you good news of great joy that will be for all people … a savior has been born for you who is Christ and Lord.”  (Lk. 2:10-11)  It is not abstract and isolated ideologies and theologies cut off from everyday reality that grasp the ever-new work of God, rather it is simple people of faith – the poor and the humble.

The lessons of Christmas are so profound and so necessary.  Despite the turmoil of any age and the raw exercising of power, God is at work accomplishing his plan.  This babe born in Bethlehem is the one to whom all knees must bend and all hearts must bow and when we can do that, then peace and joy will be found!  In Christ, knowledge comes humbly – knowledge for the pains of our world and the pains of our hearts.  Abstract and isolated ideologies quickly become cold, hard and dictatorial.  This is not God’s way.  God reveals himself to the poor and the humble and God chooses to abide with them.

Lord Jesus, we welcome you.  Heal our world.  Soften our hearts.  Help us to know the newness of your peace.  You are Wonder-Counselor, God-Hero, Father-Forever and Prince of Peace.  Lord Jesus, you choose to be born in your time and in your way.  May we be humble and poor enough to recognize you when you come to us.

Thank you Jesus for loving us.